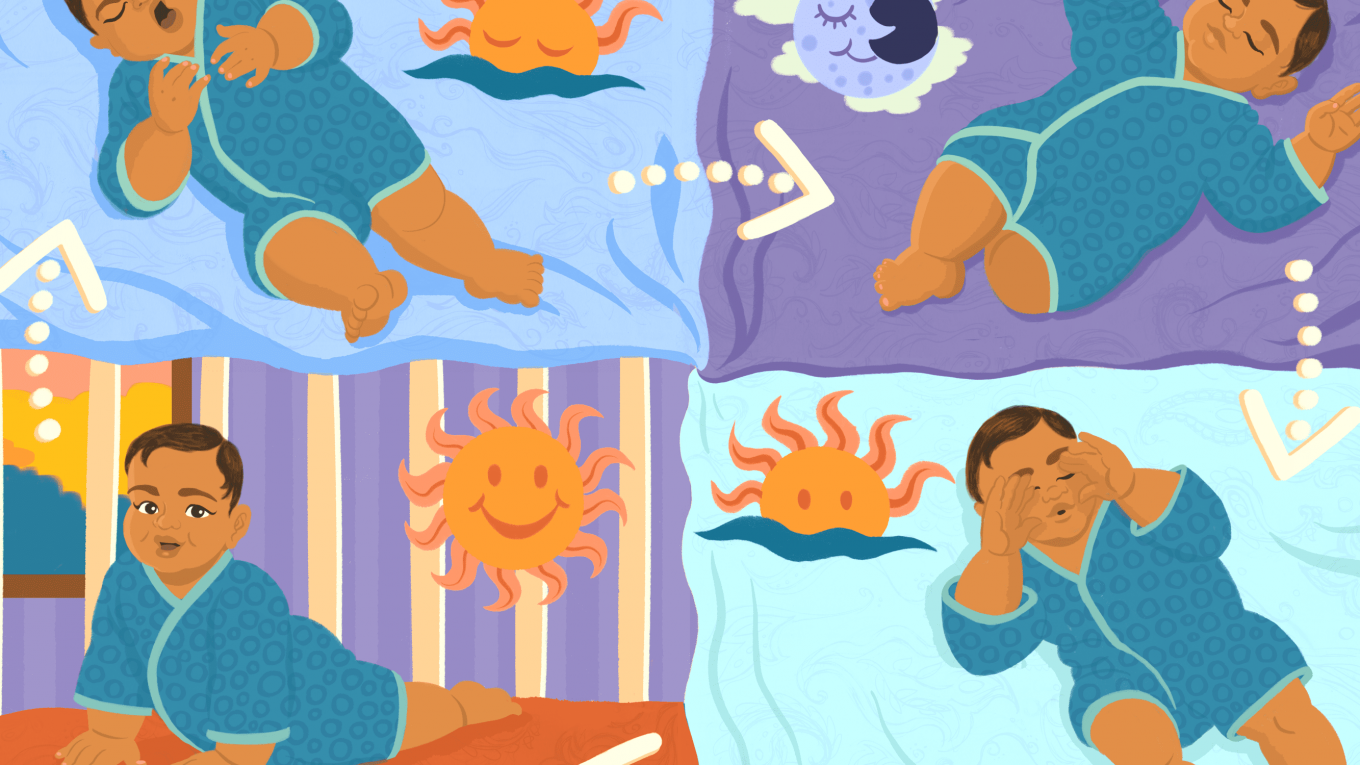 But why doesn’t he sleep through the night?

The main reason he wakes up in the middle of the night is because he needs to satisfy a vital need: eating! Remember how comfortable he was when he was warm in your belly, connected to you by the umbilical cord that brought him food on demand. Now, of course, he has to beg for food, day and night. Until 3 months, he doesn’t know the difference between day and night, much to your dismay. His biological clock is not yet mature. It is the regularity of his meals, his wakings, his lifestyle (nursery, departure and return of the parents), the variation of light, the calm of the night and the agitation of the day, which will allow your child to find the good rhythm. But keep in mind that a night for a baby is 6 hours and not 12 hours. Don’t expect to sleep in anymore. Gone are the days of carelessness!

It is important to know that a baby wakes up many times during the night, without alerting you each time. A 3-month-old baby, for example, can wake up up to 8 times. If you have avoided putting him to sleep at each cry with a lullaby in your arms, baby will play quietly with his comforter or blanket, then go back to sleep by himself. He will only cry for his bottles.

He needs time to adapt to his new environment

After 9 months in your belly, your baby needs to adapt to a new rhythm, new voices, a new atmosphere. Give him time to adapt. He will adapt more quickly if he feels secure. Reassure him, create a serene framework, with a routine that will provide a framework. This comforting setting, while you’re at it, will be established in his own room, with soothing colors and soft toys to surround him. Framed by a ritual, he will fall asleep alone and serenely.

At what age does his need for a bottle diminish?

It is only around 8 weeks, or the 5 kilos mark, that he is able to sleep 6 hours in a row without asking for his bottle. He has reached a weight that allows him to have enough reserves to last a little while. He is also more inclined to wait for the bottle to warm up. If baby can find a rhythm of 4 to 5 bottles a day and that each meal contains at least 150ml of milk, he will have more chance to sleep through the night.

Will a breastfed baby sleep later than others?

Some babies still wake up at night to feed even though their biological clock is mature. But it’s true that breast milk is digested faster than formula and the amounts swallowed are smaller.

Often, at night, he could go back to sleep on his own without feeding, but the warmth of the breast has become a habit. So when breastfeeding is no longer exclusive, and he has bottles at night, it will be interesting to create a little distance between mother and baby. Dad could give the bottle. Or, mom could wait a little while, until he is really crying out, before going to him.

Tips to help baby sleep through the night

One morning, you’ll be awakened by daylight through the curtains and not by his crying. But panic! You’ll run into his room to check if he’s still breathing. And then you’ll look at your little wonder sleeping soundly. And then, a huge smile will settle on your face. He’s starting to sleep through the night and you’ll finally be able to recover from those first few exhausting months.